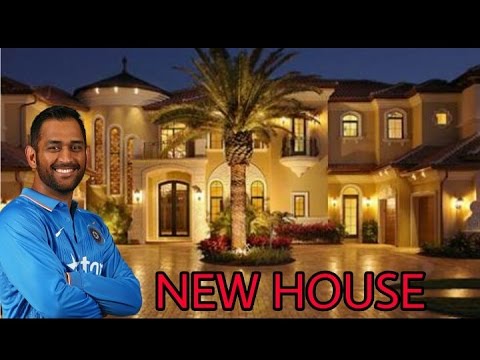 M S Dhoni is versatile player who is very talented in playing cricket. He clocked up to the current glory when his school cricket coach KR Banerjee, spotted the correct stuff in him. He has exceptional cricket skill that Banerjee seen him and told to start doing cricket practice. And, because of a humble teacher and his discovery give India the hero of cricketer. No doubt if we say that he is one of the celebrated players of the century. He had played his debut Ranji trophy match in the 2000. In 2005 he had player of the series in India V. Sri Lanka that can be said another feather in his cap.

He one of the best talented players of the team and because of his cool nature is everyone’s favorite. As Dhoni is cool in the same way his house is supercool. The video will show everything about the house. The house of Dhoni is the perfect combination of space, design and layout. You will see that tradition and advancement both are included here. This is 100% sure that after watching this video you will have complete information about how national team player Dhoni has house, that is dream of everyone.

Benefits of Owning and Living in an Apartment Over a House

Benefits of Owning and Living in an Apartment Over a House

Why are the Luxury Apartments a Great Choice?

Why are the Luxury Apartments a Great Choice?