We have a plot size of 16 ft 4 inch 40 ft plot. We had one of the clients of Kanpur named Vivek Kumar. He has a basic requirement of two bedrooms, a kitchen, a bedroom, a shop, this was the basic sequence of which we have decided to complete and this plot which is according to Vaastu, I am going to tell you about Vaastu. But one thing in which I want to tell more, as you know that the Vaastu is not possible in any 100 plot size or small size plot, then we have tried to do most of the Vaastu and also tell you which one of the things is not staying according to Vaastu.

(ALSO READ: WHAT IS VASTU 22’X 27 ‘SOUTH DIRECTION HOUSE INCLUDING TIPS AND DIRECTION) 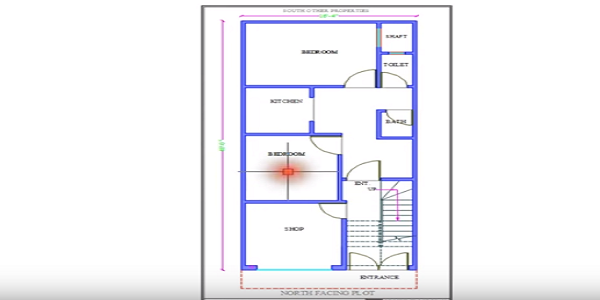 So let us see if we are not able to do what is in the possession of Vaastu, then we know Vaastu cannot be done in small size of the plot. In order to arrange all the things according to vaastu, we have to reorder all the things in this plot. Now we arrange this plot 40 to 60 percent according to Vaastu. The first thing is that this is a north facing plot. We have avoided stair in this potion. It would have been a sensible suggestion. In this, we have given it on Northwest potion, which is compatible in both of the portions, but people still give it on northwest portion. After that we  gave a shop on staircase left corner, after that, the second part is a dough. We gave it a bedroom on the second part. After that I will show you the furniture where remaining space will be left at the entrance point. Then another requirement of the client came to know that I had a toilet and bathroom in different spaces.

We have made it here and we have given the bathroom and away from the toilet portion, The door of bathroom should be placed in front of bathroom because little bit space in not dry near bathroom. We got the kitchen on the on the top of the kitchen , We have given the second bedroom in the upper portion the rest of the space is left at the left side of shaft and toilet. We can make one foot bigger but the bathroom cannot grow if the size of bathroom grow  then the remaining space is occupied by bathroom. We first place the kitchen on the place of second bedroom and placed it on the position, then it was not correct, so we kept the kitchen below the second bedroom. Now all things should be placed according to Vaastu.